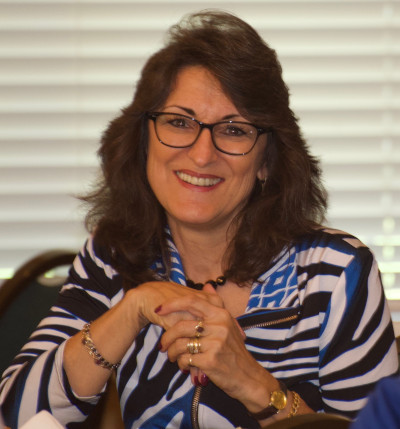 Diana Williams is deeply committed to Marion County politics. She has served on the DEC for 10 years and seeks to set a stage of inclusion and diversity by supporting social and economic equality opportunities for all. As Program Chair for the Marion County DEC, Diana diligently provided programs to educate and enlighten members by selecting topics that helped to broaden their views, understanding, and knowledge of said topics

Diana is a multi-tasker. As a mother of four, she manages a professional career (as a Financial Advisor for 25 years) and sits on many boards of directors. She has been active with the DEC fundraisers, involved with the local affiliate and state boards of NAMI (National Alliance on Mental Illness), and is currently serving on the boards of the Salvation Army, Historic Ocala Preservation Society (HOPS), and the Independent Citizens Referendum Oversight Committee (ICROC) for school board tax. She has been a member of Kiwanis since 1991, is a member of the Ocala Women’s Network (OWN), helped start the Democratic Women’s Club, is a former Supreme Court Mediator, and is a member of Friends of Silver Springs State Park.

Diana believes the plan for moving forward after the election is best expressed by RBG’s quote: “Fight for the things that you are about, but do it in a way that will lead others to join you.” She is also of the opinion that we must find common ground, move ahead with compromise, line up qualified candidates to run for office, and engage with more young voters and working groups.

Michael Davis, the Vice Chair, was first elected in January of 2020 to fill the second year of the Vice Chair term. He took on the role of communications with clubs and Precinct Captains and provided data and charts for the effort to sign up Democrats for Vote by Mail, and tracked the Vote by Mail ballots as they came in. He hopes to continue assisting the DEC and Democrats win up and down the ballot and increase the number of Precinct Captains. During the 8 years that Michael has been a member of the DEC, he has restarted the Oak Run Democratic Club, served as President and board member of the club, and vigorously participated in Get Out the Vote (GOTV). He is also a charter member of the Bridges Project and Guardian-ad-Litem. Michael believes the DEC needs to retain and add Precinct Captains who are the core of the Executive Committee, strengthen existing clubs and caucuses, develop more community outreach, and build on the GOTV efforts we developed in 2020.

Richard Perry, the Treasurer and State Committeeman, has almost 16 years of experience on the State Executive Committee where he has served on the Rules Committee drafting a new charter and bylaws for the FDP to make the voting system more equitable.

Rick is a native Floridian who has lived in Marion County since 1985. He has served on the Board of Directors of The Centers, the Historic Ocala Preservation Society, and the Marion County Bar Association. As a pro bono lawyer for Community Legal Services of Mid-Florida, he has represented the poor in cases involving domestic violence, slumlords, and children wrongfully taken by the state or kidnapped across state lines.

His involvement with the DEC and FDP also includes chairing the coordinated campaigns at least four times, representing Al Gore in the 2000 recount, attending the 2008 Democratic National Convention, and representing Ire Bethea and Joe Biden in recent elections. Rick wants the Marion County Democratic Party to grow. He would like the DEC to reach out to the younger generation and recruit local candidates, particularly for non-partisan races.

Joyce Blake, the State Committeewoman, wants to continue working with our local clubs and the Florida Democratic Party. She has developed an understanding of the workings of the party due to her 8 years of experience in this position. She is also the Vice Chair for the State Clubs and Caucus Committee. She has been a DEC member for 11 years.

Joyce has been very active with the Marion County Democratic Party and the state party where she was the DEC Coordinated Campaign Chair, the DEC Chair, and the FDP Congressional District 3 Chair and Vice Chair. She also worked on the 2008 Obama campaign.

Joyce believes that we need to reach out to Marion County’s Democrats, including younger voters and Independent voters, and we need to register more Precinct Captains. Those who have worked with her know that she is a team player and a consensus builder.